Skip to content Skip to main menu
Home › Uncategorized › You can do it! 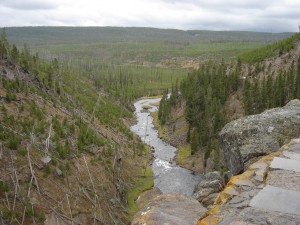 Set your eyes on success. Better days are just around the corner. Don’t stop moving toward your goal. You can do it! Sometimes it feels as though all the odds are against you . . . regardless, continue forward. Obstacles are just that. Go around them or over them or right through them.
During adversity our true character shines through! Put one foot in front of the other and don’t stop! Make the decision to grind right through your situation one day at a time and never look back. You will be amazed at the amount of ground you can cover as you continue toward your goal. Never quit or stop! Determination and persistence will pay off.
On vacation one time, a friend and I decided to go for a hike in the mountains, just outside Big Sky, Montana. It was a beautiful September day, and we didn’t set any specific goals or talk about a particular destination; we just said, let’s hike three to four hours up the mountain, eat lunch and hike back, assured as we were that on this well-traveled trail, the hike would be easy.
But as we climbed, the air became thinner and breathing became more difficult, to the point where we had to stop walking if we wanted to eat or talk. We followed the trail along a stream, crossed the stream, climbed some more and then found ourselves in a dazzling meadow brimming with colorful wildflowers and framed by a thick grove of pine trees, with the stream seemingly meandering toward the sky. Suddenly, as if in a dream, there it was: the top of the mountain! In an instant, the goal was obvious to both of us: we had to make it to the summit. We just knew that the view from that mountaintop would be beyond description. What had begun as a leisurely hike with no real objective or destination had now become a quest, motivated by our determination to make it to the top.
This mountain was going to be conquered! Sometimes all it takes is a glimpse of the top, a new turn or a crossing over the stream, and you look up and there’s a whole new perspective—wildflowers, a new challenge, a stream you’ve been following and crossing now appearing to be flowing from the heavens. The challenge looms before you, and you say to yourself, I can get there! You picture the view. The air may get thinner, but it doesn’t matter because you adjust, you stop talking, you stop eating and you start doing, moving, walking, one foot in front of the other.
The top will never be reached if you never start, or if you start but stop as the breathing gets harder, the work more difficult. So start right now and don’t stop till the summit is at your feet!
Something else I remember about that hike is that the top was farther away than it looked. Distance in the mountains can be difficult to gauge, and often objects are farther off than one assumes. Also, the weather that day changed with no warning: due to the high elevation, the temperature dropped, and as we climbed we even experienced snow flurries. In other words, even as the path still was leading us toward our goal, the conditions were worsening, our environment was changing and the degree of difficulty was increasing. Sounds a lot like life, doesn’t it? But we didn’t quit. We kept climbing, with the air thinning, temperatures dropping, snow blowing and muscles tiring— up and up and up. Our eyes were set on the peak. Our mind’s image of the view from the top was so vivid, we never considered turning back. Get that vivid picture of your goal and never turn back.
You can do it!